Madge’s story and her one-page profile 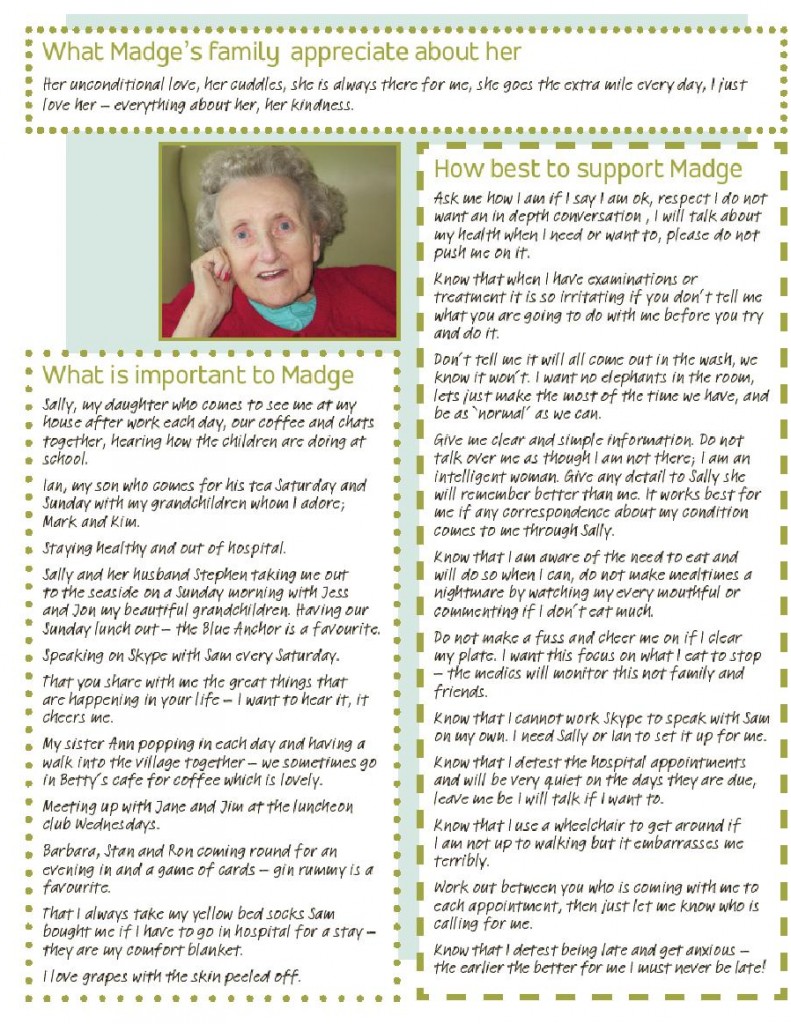 Madge, 67, lives on the Fylde Coast. She is full of fun, a great storyteller and very sociable. She has three children and four grandchildren. Her family are her life and Madge gets a great deal of pleasure from her grandchildren who range from six to eleven years old. Madge’s daughter Sally and her son Ian live nearby with their partners. Her other son Sam lives in Australia and Madge talks to him on Skype every weekend.

One year ago Madge’s world changed irreversibly. She was diagnosed with cancer of the oesophagus. Two months after receiving her diagnosis Madge underwent major surgery. On a bad day, Madge struggles to get out of bed. She often has to use a wheelchair to get about. She struggles to eat and enjoy her food and finds it difficult to sleep. Madge’s illness has taken its toll on her physically. She has lost three stone in recent months and her mobility is suffering more and more. But it is the mental and emotional impact that her diagnosis has had on Madge and her family which she finds most upsetting. Madge is a strong, intelligent, independent woman and watching the people she loves worry after her, seeing the concern in their eyes as they watch her eat or fretfully ask after her wellbeing, has been incredibly hard. Madge needed to find a way of managing her condition, her emotions and those of the people close to her. The cancer wouldn’t go away but Madge wasn’t going to let it take control of her life.

We introduced person-centred thinking tools and specifically a one-page profile to Madge so that she could explore and communicate what was important to her and how best people could support her. As well as helping Madge to talk openly about her hopes and fears, she was able to specifically address some of the things that she found most frustrating about her condition and in turn how people could help her to manage this.

Madge developed a one-page profile and shared it with family and friends but also with medical and support staff who needed to understand Madge better in order to care for her in the way that she wished. In her one-page profile, Madge highlighted the importance of her family, the set time that she spends with them and the regular skype chats that she has with Sam each week. She noted her weekly luncheon club and card games with her friends. She described how important it was that people continued to share their good news with her because it helped keep her spirits up and how staying out of hospital was something she strived for daily.

Once she had stated the important things in her life, Madge was able to clearly say how people could support her to stay happy and healthy. This included helping her with the technical side of the skype sessions. Knowing that she was embarrassed by the wheelchair she sometimes had to use. Not making a fuss or cheering her on for clearing her plate when eating. Understanding that hospital appointments made her anxious and so organising the logistical side of it first and then letting her know who would be coming with her and when.

The one-page profile, together with other person-centred thinking tools, has been used to review Madge’s care and plan her support. It has helped the people closest to her to focus on the positive things they can do to support her, something which is incredibly difficult when dealing with the sadness of cancer and the changes that it brings. Madge’s family and friends remain the most important parts of her life and she is choosing to spend her time with the people she loves. She won’t stop laughing and she won’t let the cancer stop her living her life the way she wants to live it.

To see the record of the person-centred thinking tools that Madge and the team used, follow this link – livingwell