After a wonderful Spring break in Malta at my daughter’s wedding, I returned to school feeling refreshed and ready for anything! 125 Year 7 pupils for a whole day in our assembly hall writing their One Page Profiles was the challenge ahead.

With all the preparations done before we finished, I used the Monday we returned to finalise the resources and check on any equipment that was needed.  All the guests had been invited to observe the day, the Chair of Governors, our Head Teacher, School staff who were available to attend during the day.  All the stage was set; all that was needed now was the students.

I arrived into school feeling very nervous but also very excited as this was the first time our school had attempted this on such a grand scale.  Gill Goodwin and Ben Rosamond arrived at school equally as enthusiastic about our day.

The students were brought into the assembly hall by their Form teachers who were going to spend the whole day working together with them on their Profiles.  We started our day with Fink cards and did a group exercise getting to know each other by asking questions on the cards to generate engagement.  Our students are good at this activity as they frequently work together on group building exercise in their classes and also together in large groups around school.  We decided as part of our day we would use a selection of celebrity images to help us with our activities.

The first activity involved our student’s gathering ‘Likes and Admires’ from their peers. We used the celebrity theme to think about appropriate language and positive comments, what sort of nice things people would say about them and the sort of things we could record.  For this exercise we used appreciation bags.  A simple paper bag which was first decorated to their choice, personalising it in a very individual way with their names and any hobbies or interests. Each student was then issued with a number of small cards in which they were expected to write positive comments for their friends and place them in their bags.  This exercise gave staff some concerns as they were really worried that there might be some inappropriate comments given.  However, as we had already demonstrated it with the celebs it didn’t become an issue.  We as adults went around the students and gave them some positive cards too, just to ensure that everybody had some in their bags. This was a huge success and they all seemed to enjoy their time getting up and moving around the room in order to give other friends in other classes positive cards too.

There then followed a series of other activities which were all supported with modelling and support from all the staff involved and which built up the basis of the One Page Profile.  This was mainly a success due to the preparation that had taken place prior to the day.  I had called several meetings with all the staff involved to run through activities and ensure that each person knew what exactly was expected in order to gain the necessary information.  Letters had been sent out to parents to prepare them for the day, gaining permission for us to take their children off timetable for the whole day too. Special guests had been invited which made the students feel that it was an important event that was taking place and senior management popped in at some time during the day to have a look.

The most amazing part of the day for me was the comments that we collected from some of the students who had taken part in the ‘Big Brother Diary Room’.  Luckily for us Ben is from the North East and therefore had the perfect accent to carry out this.  Students were invited to enter and give feedback on the sessions at any point during the day, being honest about how they thought the process had been in a relaxed and fun environment.  We had an outstanding contribution from the groups and we ended up with some wonderful comments; “I connected with my friends more”, “It was good thinking about what was important to me”, “It’s been fun, I know now if I feel a bit lonely I have friends”, “I’m looking forward to parents’ celebration night so my mum can see what my friends said” and “Could share our profiles with new people coming into school”.  These are just some of the lovely things recorded as shown below. 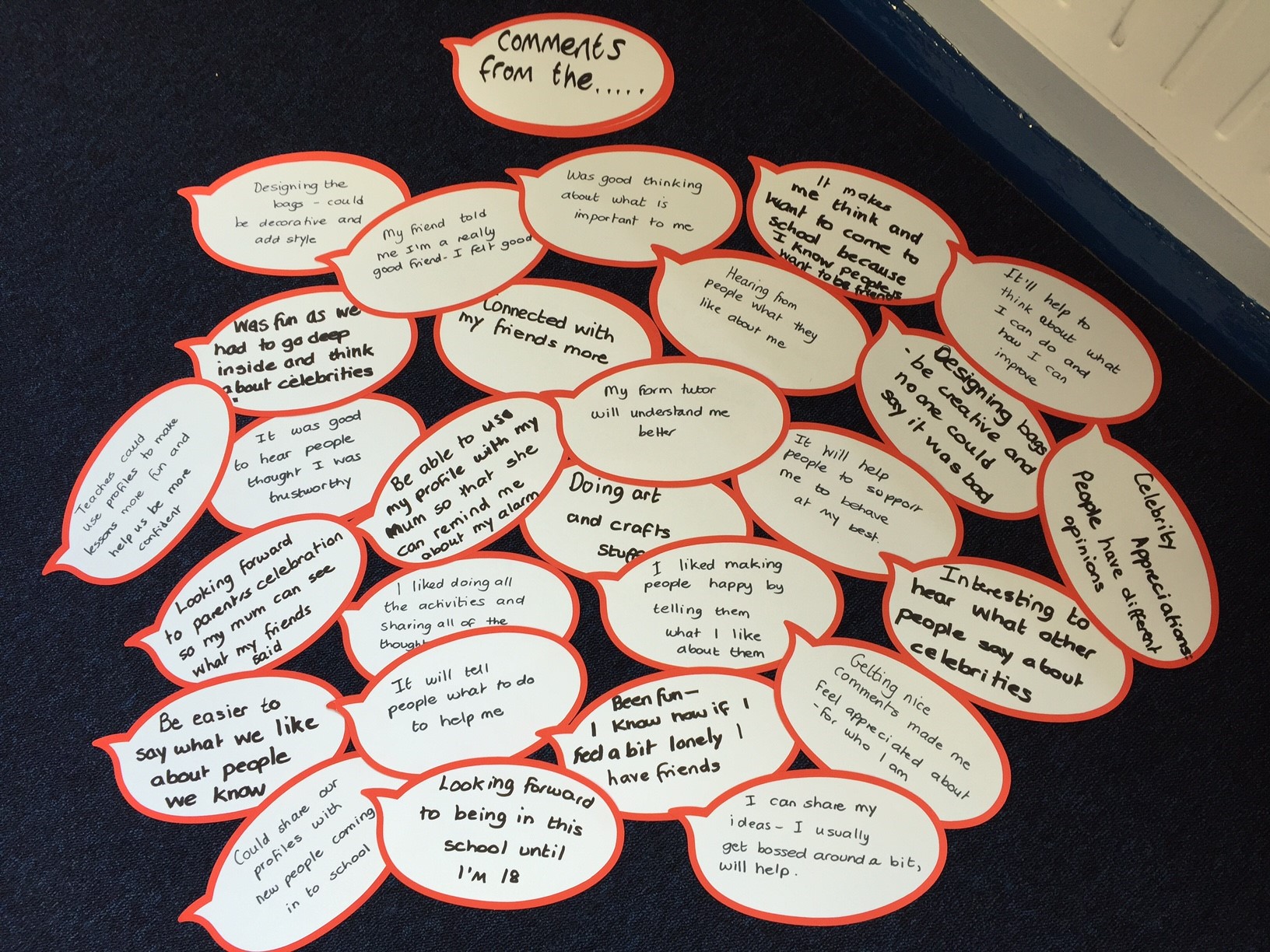 The overall result from the day, apart from each student walking away with a completed profile and feeling that they had been given a voice, was the overwhelming success of the day.  It was fraught at times but managed to be great fun and everyone walked away feeling good – staff and pupils alike.  The resources worked well and were engaging, colourful and easy to use.  It was a safe environment for the students surrounded by people that were familiar to them, people they could trust.  We did adapt resources as we went along if we had to, but it was fab.

Any concerns. Well, size and volume needs to be addressed when we do it next year! Phew it was exhausting!!  I thought Gill was going to lose her voice!! Need a teachers’ voice in a hall that big!! The writing up and pulling together of information would have been much better done in a room just with the form group and form teacher.  This then would have been quieter and easier to discuss with their teacher; help could have been given to those students who needed a little extra support.  The most important issue is that they are now used as part of school curriculum and teaching staff use them to plan and development on an individual basis.

What next?  It was agreed that we need to do a sample quality check to ensure that each form has incorporated the most important information and used it wisely.  That their profiles are available for our Celebration Evening in July and parents can comment on the contents and hopefully feel as proud as their children in the end product.  Each form is planning to present their profiles in individual ways, there’s a rap in the making, a news flash for OPP etc., it’s going to be so exciting.  Our One Page Profiles in a day was a big feature of our school year and next year will be no exception.  It will take place earlier on so that we can have the full benefit from their profiles, but with a few tweaks will be able to follow the same agenda.  It is my intention to put together a lesson plan and information pack to be able to share with other practises for future use.  Thanks for listening to our journey, I would love to hear from anybody who has done something similar.