Person-centred recruitment – what does that mean in practice?

Over the last few months I have been thinking and talking to people about what they are trying and learning about person-centred recruitment.

Paul Snell, Chief Executive at Walsingham kindly agreed to get start this new monthly blog series on recruitment for me. 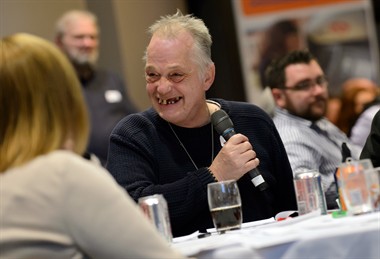 For some time now, Walsingham has encouraged people we support to play an active role in staff recruitment.

After all, how can we honestly say that we’re putting people at the centre of their support if we’re not involving them in the decision of who supports them?

If you think about it, when someone applies for a position within any organisation, the applicant is more than likely going to be interviewed by members of the respective team or people who they’d be working closely with.

When you take that into consideration, it seems obvious that a support worker role should be no different. And while we as professionals within the social care sector have an understanding of what characteristics and skills make a fantastic, person centred support worker, having an ‘expert by experience’ on the interview panel could be the difference between employing someone good and someone great for the position.

To facilitate this, we have produced easy read documents about ‘Choosing Staff’, which list how people can get involved in the process, such as being on the recruitment panel, meeting/greeting candidates and speaking to them before or after the interview.

In addition, people wishing to be involved have been coached on interview techniques and given sessions on building confidence, so they feel comfortable being a part of a panel.

The benefit of investing time in this was displayed recently at a recruitment drive for support workers in South Wales.

In the lead up to the day, we asked people from the Citizen Group in Wales – a group of people we support who meet on a monthly basis – if they would like to be included in the event and, if so, how?

After numerous discussions, it was agreed that a working group would be formed from eight citizens, 10 managers and six support workers, with each person having a role on the day.

Planning key roles ahead really helped as more than 80 people attended the event, with 30 candidates successfully making it to the next stage of the recruitment process.

What we were particular pleased with was that people felt valued and empowered throughout the experience, as they had an equal say as to which candidates progressed.

All in all it was a successful day, but don’t take just my word for it. Here are some of the comments from people following the event:

“I enjoyed being able to give the candidates a chance to make the next move in their career. The venue was good because it was professional yet still personal.”

“It was very good. I enjoyed being on the interview panel. I liked interviewing people as I got to ask questions related to my own support needs.”

After the event we produced an easy read document that could be used to showcase how the recruitment day was organised, how people were involved and the achieved outcomes.

This has since been shared with other people from the Citizen Group, who couldn’t attend and may wish to be involved next time.

So what’s the next step for us? Well, in November 2014 we held our first ever Involvement Conference, during which we ran a session specifically on further personalising our recruitment process.

With the support of Keith Smith, Development Manager at the British Institute of Learning Disabilities (BILD), and feedback from people we support, we’ve identified the preferred skills and qualities that people like to see in support workers.

From these opinions, we’re fine tuning our person specification so it better reflects the needs of people we support.

You're here: Home • Reading room • Person-centred recruitment – what does that mean in practice?