Person-Centred Thinking and the Downley ‘Keep Our School Outstanding’ Campaign.

We’re very lucky to live in a village with an outstanding primary school. As one of the local residents said recently,’ the effects of an outstanding school reach far further than the school gate’, with a sense of community and positivity extending into the whole local area. People feel pleased to live somewhere where their kids are able to learn and grow in a great environment.

It was therefore a concern to everyone when it was announced that we were facing serious funding cuts, potentially affecting the school’s ability to maintain standards. The reasons for the cuts are due to changes in funding – Downley is a reasonably affluent area, so there are fewer pupils who attract the pupil premium – funding which is designed to support the most disadvantaged children in society. No-one here argues with the need to support those who most need help, but at the same time we want to make sure our school doesn’t suffer, so the question is ‘What can we do to help?’

The Keep Our School Outstanding campaign was started by the Governing body, with the aim of bringing parents and staff together to think of ways in which the community can get behind the school.

Campaigns like this are tricky – they always start with the best intentions, but consultations with parents are often ineffective, communication is often haphazard, and meetings can quickly turn into frustrating talking shops which don’t result in actions. This is made worse by meetings needing to take place in the evening, with tired and busy parents meeting with tired and busy staff (we’ve all been there…)

Harriet and I have three kids at Downley School. It’s been a fantastic place for them to be, so we were really keen to help with the campaign if we could. We’ve both been aware of person-centred thinking tools and HSA facilitation methods for years, so we decided to see if there was a way of using the tools in a creative way in order to support the school campaign.

We wrote some initial ideas for the Governing body, and these were really well received. After a positive initial meeting with the chair and vice chair of Governors, we were given the go ahead to assist, and we moved from initial plan (mainly me!) to design and implementation (definitely Harriet!).

I have been using person-centred thinking tools for years, while working in organisations supporting people with learning disabilities, ever since I was originally trained by HSA to develop person-centred teams. As my career has developed, I have found that the tools are powerful and effective in a much wider context. I’ve got to the stage where it’s second nature to be presented with a problem and immediately think ‘what tool shall we use in this situation?’ The critical thing is to pick the right tool for the right job, and that means understanding the needs of the people you are working with.

The School Governing Body had gathered ideas to support the school from parents and the staff team. They wanted to make sure that the huge range of suggestions could be pulled together into a comprehensive plan that was ‘owned’ by everyone who participated. Looking at the suggestions, the ideas were loosely grouped into suggestions about generating income and ideas for improving volunteering, so we agreed that we would run two evening sessions that focussed on these areas.

The planning stage is really important.  I designed a format and talked at length to the Governors to ensure that what I had planned would meet their needs.  For any event that brings together a large number of people to think and plan, it is as important to focus on the event design as it is to facilitate the sessions effectively.  With a comprehensive plan, it is then easier to adapt and flex when the session is actually running.

For the first event, we knew that some of the ideas would be controversial and challenging, so we needed to create a space to think that would be non-threatening and where everyone would get a chance to contribute, regardless of their levels of confidence or experience.  The Governors made sure the evening felt social and fun, as well as purposeful (Glass of wine at a school meeting? Why not?!), so from the moment people came into the room they were pleasantly surprised by what they found. I asked people to introduce themselves at their tables (no rows of chairs here!) and to share their favourite memories of being at school.  After the initial surprise, we could hear roars of laughter around the room, as people opened up.

The resources and materials HSA had donated for the evening, along with the facilitation methods really helped everyone feel that they were part of something important. Customised posters and magic ‘sticky boards ‘ led to gasps of surprise (never underestimate the power of spray-mount!) and mutterings from senior staff about needing a big printer!

In this environment, people were then in the position to start thinking at their tables and generating their ideas.  We allowed plenty of time for this and asked people to not limit their thinking, but to say what came into their heads.  It is really important for people to do this, because a seemingly inconsequential comment can often spark an idea in another participant.

The range and number of ideas was inspiring, but clearly too much for the Governors to tackle in a short space of time. It’s at this point that we would run the risk of alienating people who had participated by ignoring ideas. We asked each table to choose their top 5, then write them on cards which were stuck onto another ‘sticky board’. Then, during a break, we gave everyone 5 stickers and asked them to ‘spot vote’ for their favourites.  The votes were then counted up, leaving us with the ‘Top 5’ ideas. These ideas will form the basis of the actions for the Keep Our School Outstanding Campaign. 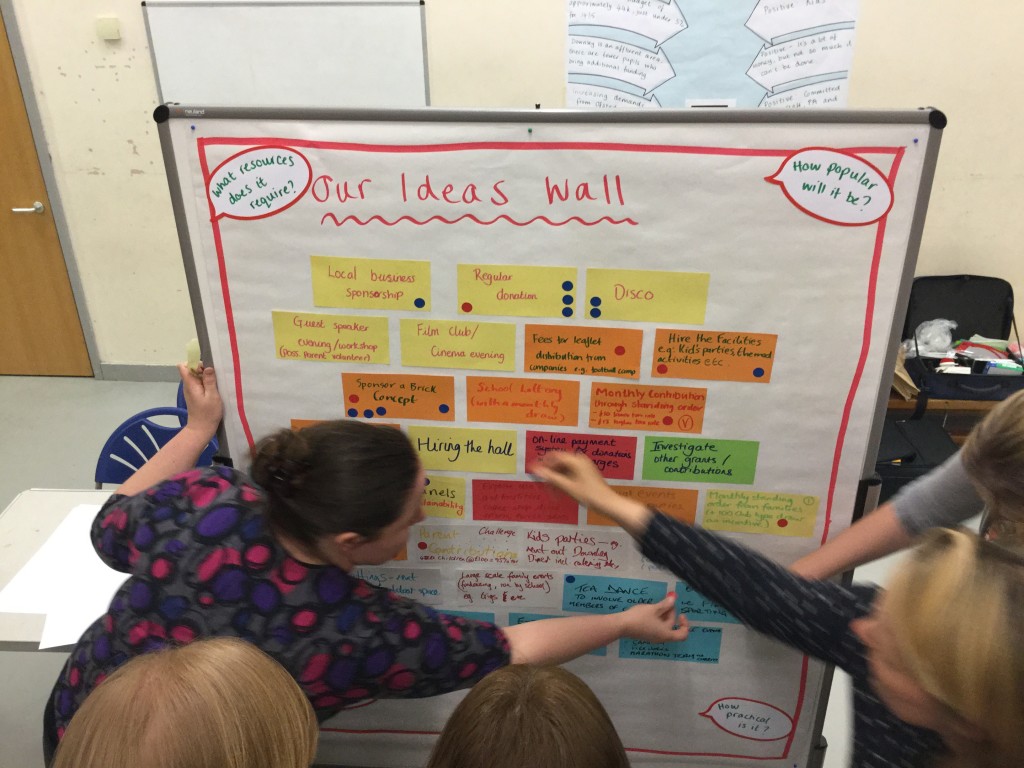 Finally, we asked people to consider their particular gifts and skills and to sign up to the ideas that they connected with most.  At this point, I was rather worried that people wouldn’t want to commit; we all live busy lives and have little time to offer.  I was delighted to be proved wrong and to see the names spreading evenly across the ideas.  There was a sense of optimism in the room and a feeling that ‘we can do this!’

We followed up the meeting with a Replay photo montage, which is a good way to show what happened, and a fun way to share this with people who weren’t able to attend, and to get people interested in the second event ‘The Downley World Café’. 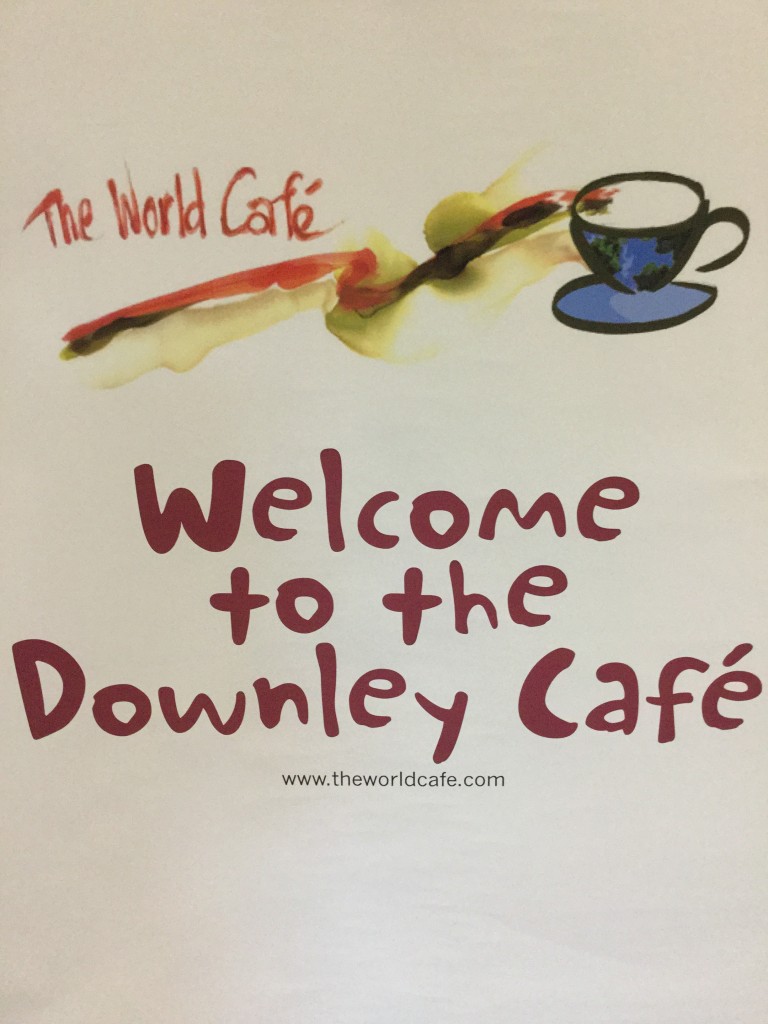 We used a ‘World Café’ event for the evening on volunteering as we knew it needed to feel different in order to keep the interest building.  I had lots of fun sourcing vases, silk flowers and tea light holders to create the café vibe.  We were also able to use large posters to inform people about the café etiquette, or Table Manners, as we chose to call it.  Again, it’s the attention to detail which makes the difference – make people feel special and they have special ideas!

We’re absolutely delighted with how the two events have gone, and the impact this has had on the Keep Our School Outstanding campaign. There’s more work to do, in terms of follow up and action planning, but the foundations are there for a really outstanding campaign.

Both evenings showed again what the person-centred thinking tools and facilitation methods do above all else – they help people to have better conversations, have better ideas and to think more creatively. A good design for an event makes sure you get where you want to be and sidesteps any opportunity for conflict or anxiety on the part of the participants of the people organising the event. Finally, events like this are fun to run and fun to be part of. And that’s why we loved being part of it!